Do you remember Kate Smith?

Frank Sinatra considered Kate Smith the best singer of her time, and said that when he and a million other guys first heard her sing “God Bless America” on the radio, they all pretended to have dust in their eyes as they wiped away a tear or two.

Here are the facts…

The link at the bottom will take you to a video showing the very first public singing of “GOD BLESS AMERICA”.  But before you watch it, you should also know the story behind the first public showing of the song.

The time was 1940. America was still in a terrible economic depression. Hitler was taking over Europe and Americans were afraid we’d have to go to war. It was a time of hardship and worry for most Americans.

This was the era just before TV, when radio shows were HUGE, and American families sat around their radios in the evenings, listening to their favorite entertainers, and no entertainer of that era was bigger than Kate Smith.

Kate was also large; plus size, as we now say, and the popular phrase still used today is in deference to her, “It ain’t over till the fat lady sings”. Kate Smith might not have made it big in the age of TV, but with her voice coming over the radio, she was the biggest star of her time.

Kate was also patriotic.  It hurt her to see Americans so depressed and afraid of what the next day would bring. She had hope for America, and faith in her fellow Americans. She wanted to do something to cheer them up, so she went to the famous American song-writer, Irving Berlin (who also wrote “White Christmas”) and asked him to write a song that would make Americans feel good again about their country.  When she described what she was looking for, he said he had just the song for her.

He went to his files and found a song that he had written, but never published, 22 years before – way back in 1917. He gave it to and she worked on it with her studio orchestra.  She and Irving Berlin were not sure how the song would be received by the public, but both agreed they would not take any profits from God Bless America. Any profits would go to the Boy Scouts of America. Over the years, the Boy Scouts have received millions of dollars in royalties from this song.

This video starts out with Kate Smith coming into the radio studio with the orchestra and an audience. She introduces the new song for the very first time, and starts singing. After the first couple verses, with her voice in the background still singing, scenes are shown from the 1940 movie, “You’re In The Army Now.”  At the 4:20 mark of the video you see a young actor in the movie, sitting in an office, reading a paper; it’s Ronald Reagan.

To this day, God Bless America stirs our patriotic feelings and pride in our country.  Back in 1940, when Kate Smith went looking for a song to raise the spirits of her fellow Americans, I doubt whether she realized just how successful the results would be for her fellow Americans during those years of hardship and worry….. and for many generations of Americans to follow.  Now that you know the story of the song, I hope you’ll enjoy it and treasure it even more.

EVERYONE HAVE A SAFE AND WONDERFUL 4TH OF JULY!!! 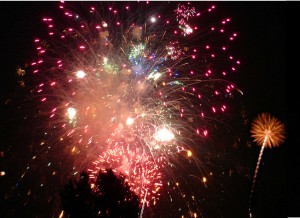 The patriotic program will begin at about 8:00 PM and the fireworks will go off at dark (about 10:00 PM). There is no charge for admission and free parking will be available at the First Baptist Church of Goshen, or Goshen Middle School. Both are on the corner of Plymouth and Indiana Ave. and are just a short walk from the Golf Course. Handicapped parking is available at the Golf Course. Bring your blanket, lawn chairs, lawn games, and picnic for a relaxing and fun family friendly evening! Concessions will be available.

According to Goshen Celebrate America’s president, Greg Lanzen, Celebrate America’s annual firework display is just the icing on the cake.  “We celebrate with a party,” Lanzen said, “but the rest of the year we are busy overseeing different parts of Celebrate America with a patriotism education program at Goshen’s middle and elementary schools and with our veterans program.”

Here is a video of Goshen’s VFW Post’s 2009 trip. Maybe you’ll see yourself or someone you know on this video:

By JOHN KLINE THE GOSHEN NEWS

GOSHEN — Elkhart County Commissioners Monday approved the temporary use of fireworks over the upcoming Labor Day weekend. The vote was made as a concession to the forced emergency ban on fireworks enacted over the 4th of July holiday due to ongoing drought conditions in the area.

According to Commissioner Frank Lucchese, the idea for the temporary allowance of fireworks stems from the large number of comments the commissioners have received from area residents who say they made expensive purchases of fireworks earlier in the year with the idea that they would be allowed to shoot them off over the 4th of July holiday.

Elkhart County Commissioners Monday, Aug. 20, 2012, approved the temporary use of fireworks over the upcoming Labor Day weekend. The vote was made as a concession to the forced emergency ban on fireworks enacted over the 4th of July holiday due to ongoing drought conditions in the area.

As we reflect on this Independence Day we must ask. Do we care? What about the Declaration of Independence? The Constitution? Do principles matter? For Liberty!

Generations of Americans have paid the ultimate sacrifice, many dying in foreign lands while longing for a last whiff of American soil, to ensure that we and our children and our children’s children could be free. Yet we are giving up freedoms, right here at home, without even a whimper. 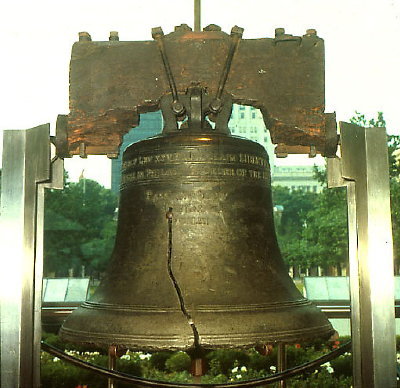 But the spirit it awakened

And when we greet the smiling sunlight

On the fourth of each July

We will ne’er forget the bellman

Who, betwixt the earth and sky,

Which, please God, shall never die

–Poem by Anonymous from The Family Book of Best Loved Poems

HAPPY INDEPENDENCE DAY TO ALL!

According to my mother, ‘Hoosier Pie’ should have two layers. The top should be a light custard. The second layer needs to be rich and even a little syrupy.

Virtually unheard of outside of Indiana, Hoosier/Sugar Cream Pie officially became Indiana’s State Pie on January 23, 2009. Although the pie is associated with the Amish, the recipe has been traced back to 1816, the year Indiana became a state and long before the Amish came to this area.

My grandparents owned the Wawasee Restaurant, Syracuse, Indiana during the ’40s (which is before I was born) and my grandmother’s “old-fashioned cream” pie was the signature dessert. She also served it at family gatherings; as did my mother. When I was a new bride, this was the first recipe I copied into the blank pages of my brand-new cookbook.

It was and always will be my favorite pie. Enjoy!  And have a safe and happy 4th!

Milk or Cream (1-1 ½ cups…enough to fill pie shell)Preheat oven to 410 degrees. Mix brown and white sugar with flour. Cut butter into flour and sugar mixture with a fork or mix it with your fingers (this pie has also been called finger pie) to crust-like consistency. Sprinkle flour/sugar mixture over pie crust. Beat egg yolk with milk. Fill pie shell. Take a spoon and swirl it through the milk mixture a couple of times. Sprinkle with cinnamon or nutmeg.

Bake at 410 degrees for 10 minutes.Then bake at 350 for 45 minutes. The filling should be bubbling. The center should still jiggle. Be careful not to overcook or the filling will not set.